Study of data on vital major webs with CrUX and 5.2 million pages

We wanted to look at the data to see how websites were doing and if we could gather important information.

The data we used comes from the Chrome User Experience Report (CrUX), which is the source of Core Web Vitals’ data and is data from actual Chrome users.

In the public dataset, the data is aggregated at the source (domain) level. We also wanted to look at the data at the page level, so we collected over 5.2 million pages of vital web information in Ahrefs’ Site Audit.

Overall, we have seen nearly 33% of websites break through the Core Web Vitals thresholds. This is up about 10% from the previous year, indicating that websites are getting faster. 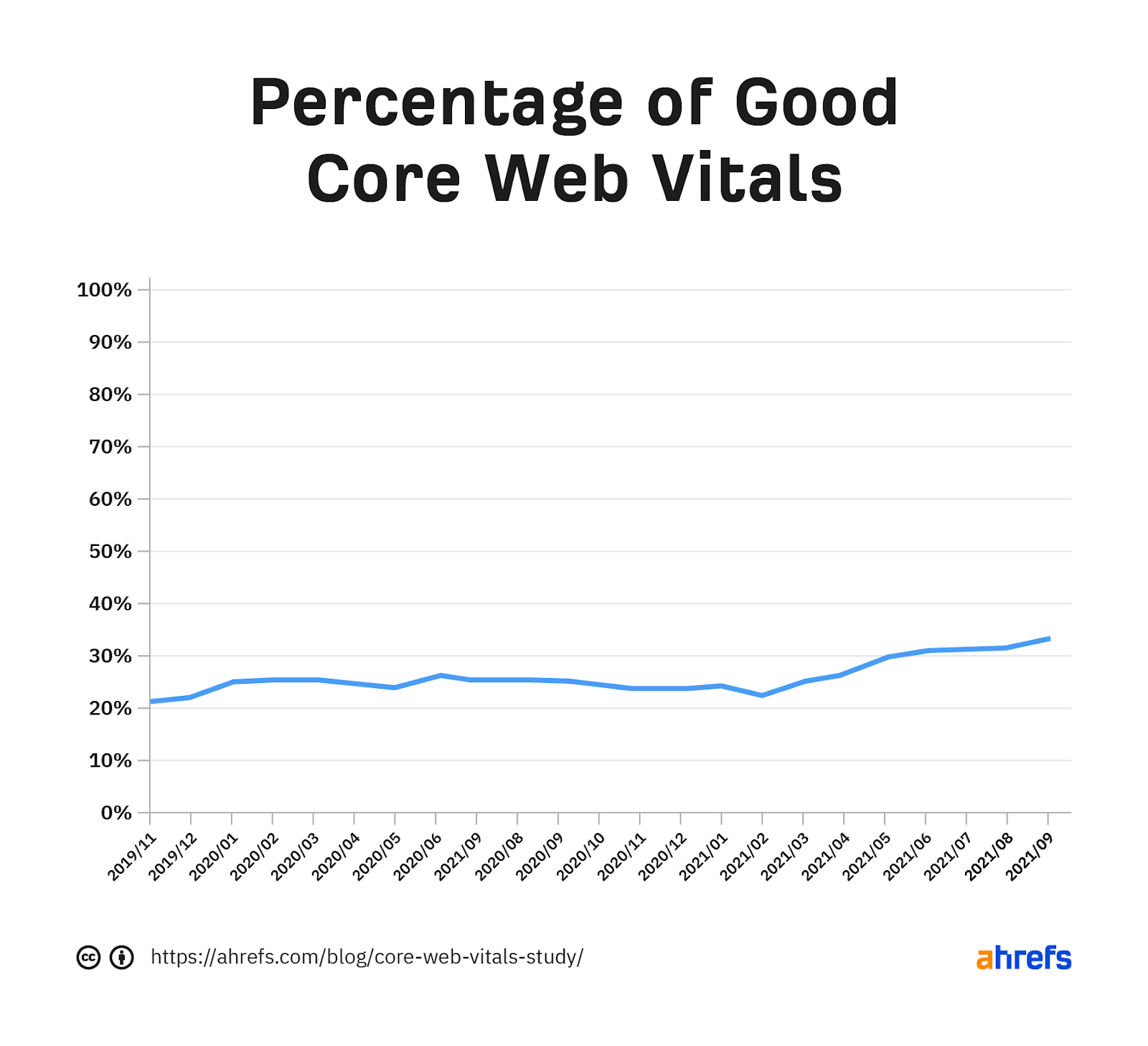 Percentage of websites that exceed the Core Web Vitals thresholds. 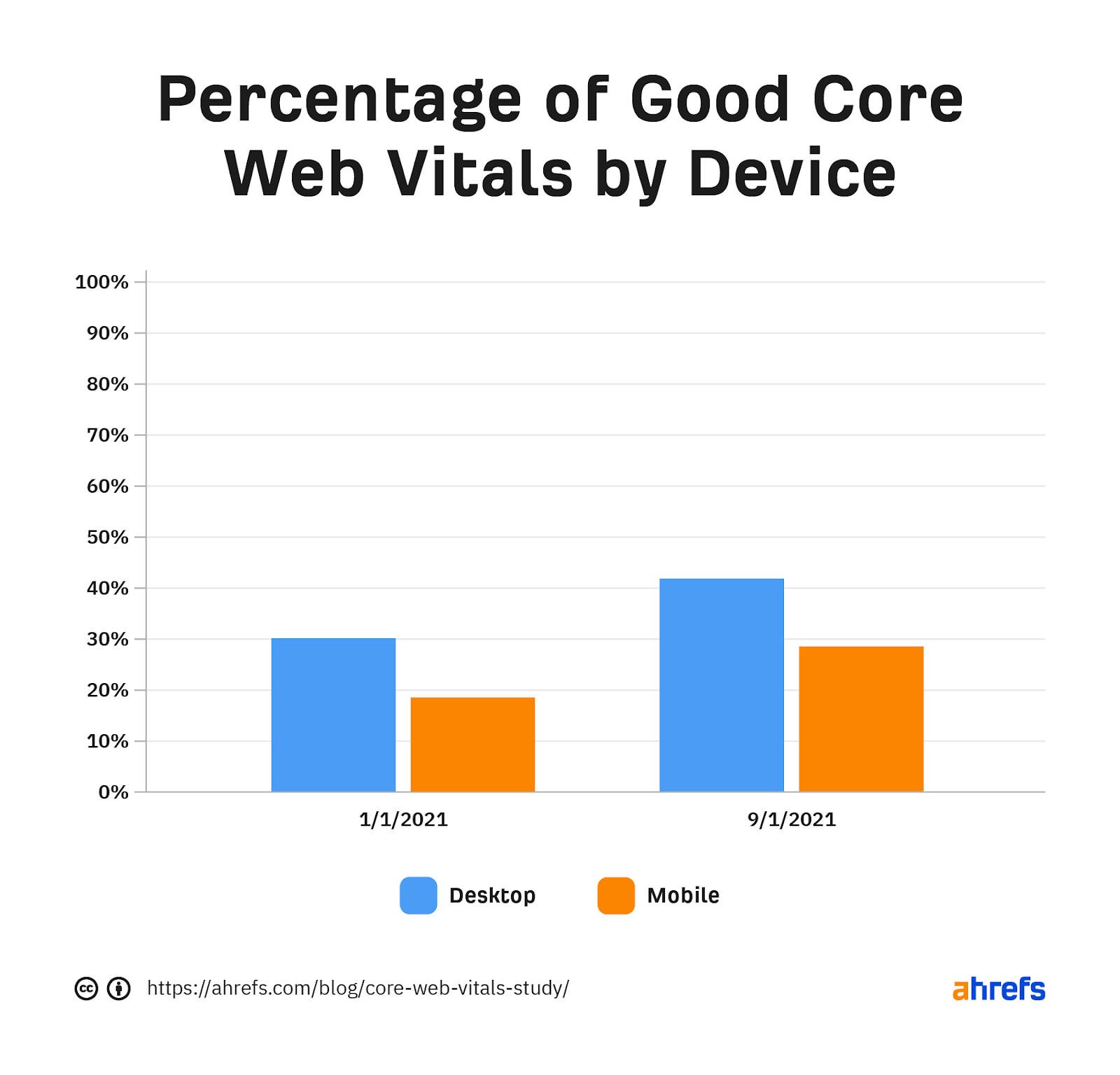 Core Web Vitals enhancement on a per device basis.

Websites appear to be making progress in improving FID and CLS, but are struggling with LCP. I’m not really surprised by this. LCP has the largest number of components, making it the most difficult to repair. 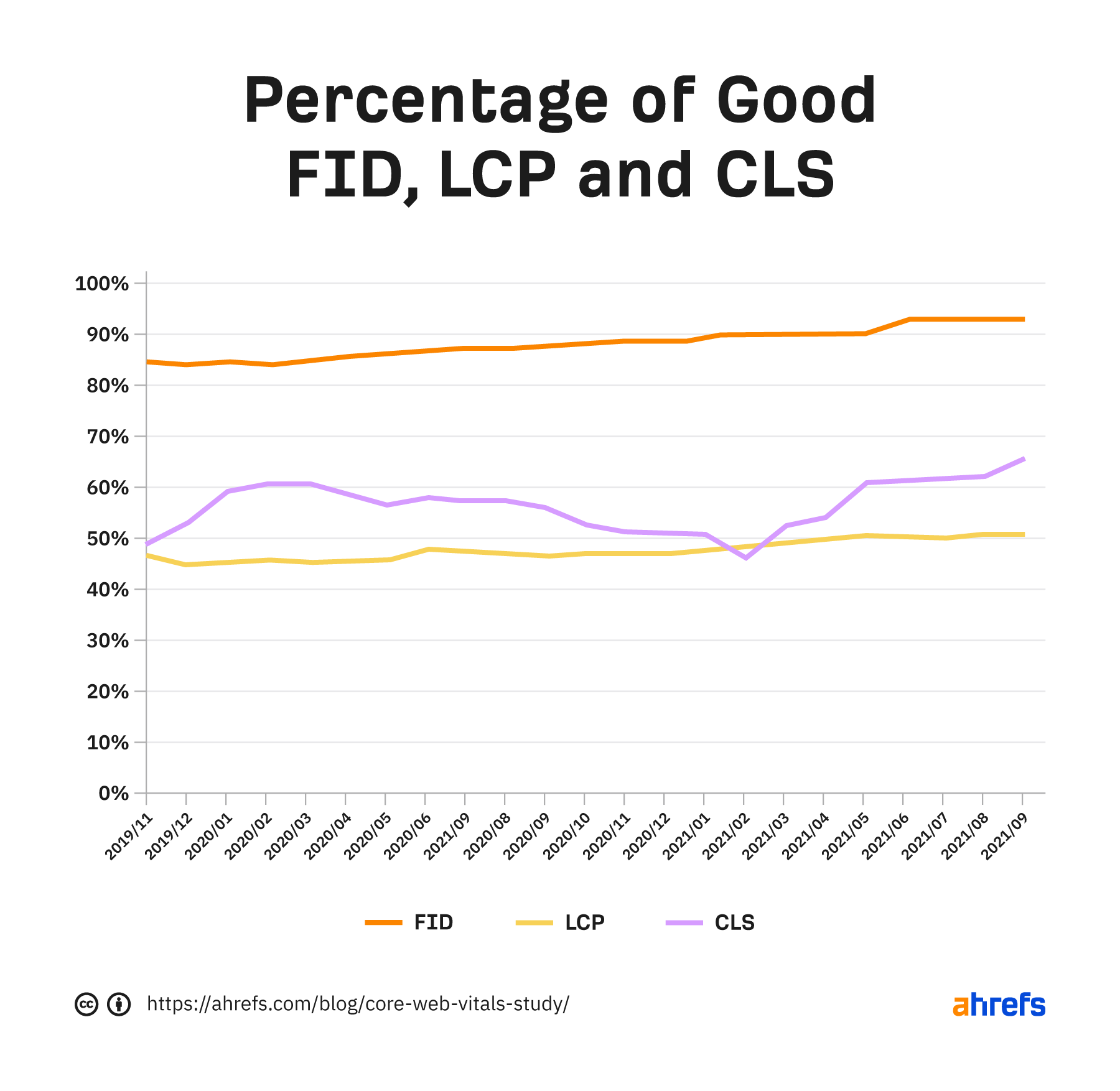 Percentage of FID, LCP and CLS coupons over time.

Websites seem to have a little more trouble with LCP on mobile devices than desktops. It is probably due to the connection speed and mobile CPUs that have less processing power.

CLS is similar on mobile and desktop. 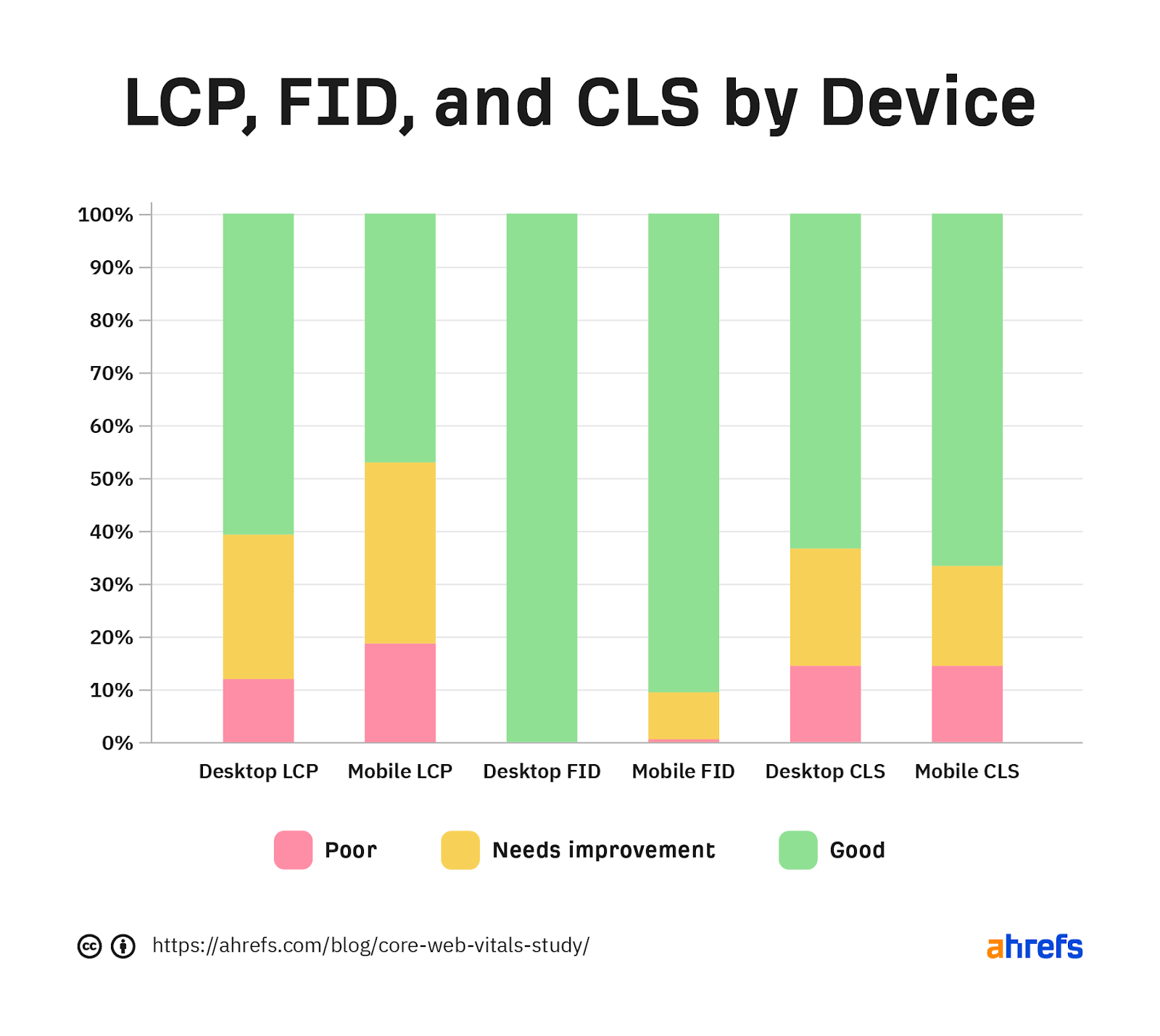 Further breakdown of LCP, FID and CLS by device. 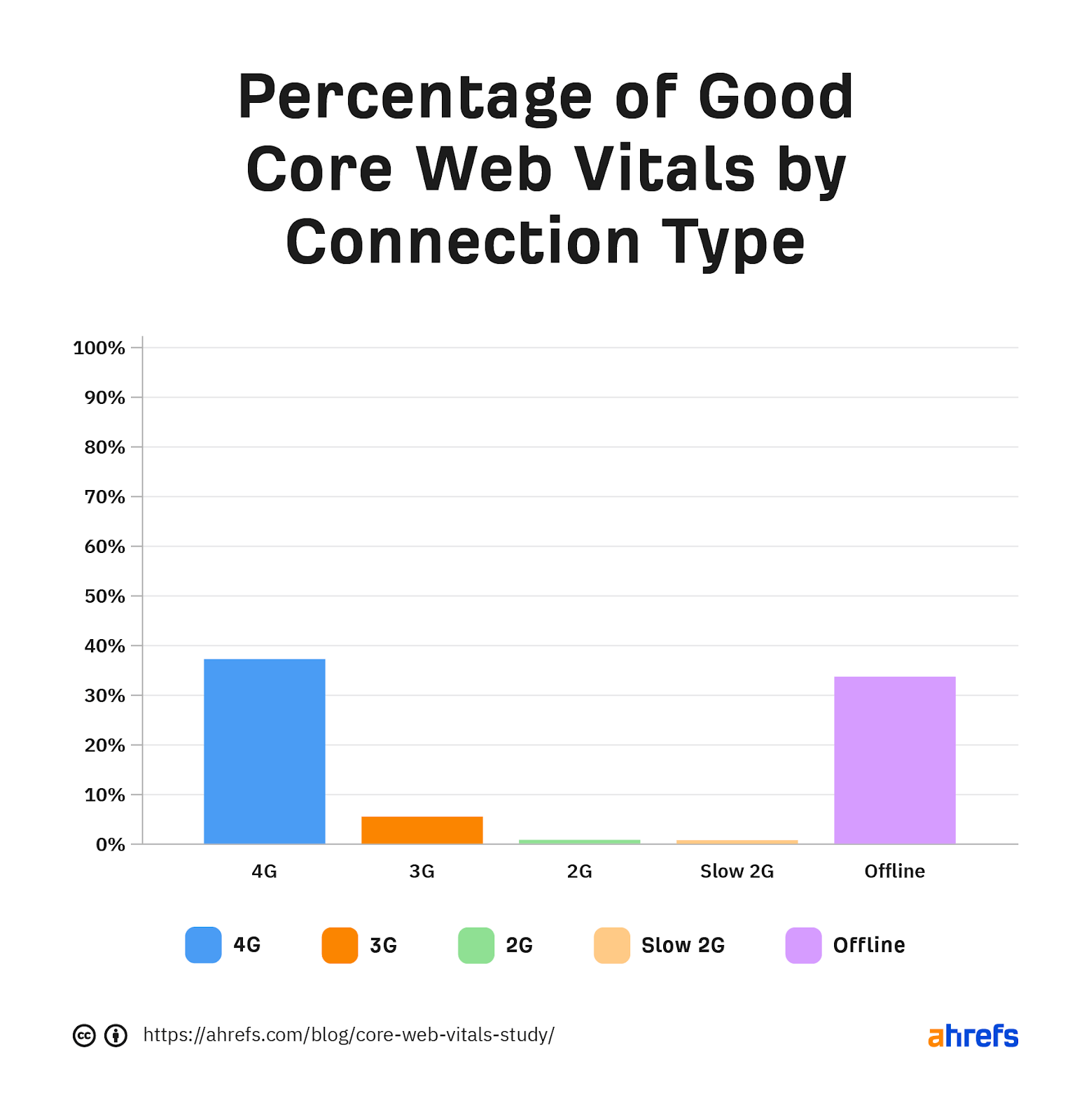 Here’s another way to look at the data with individual metrics broken down by connection speed. The LCP threshold seems nearly impossible to pass over slower connections. 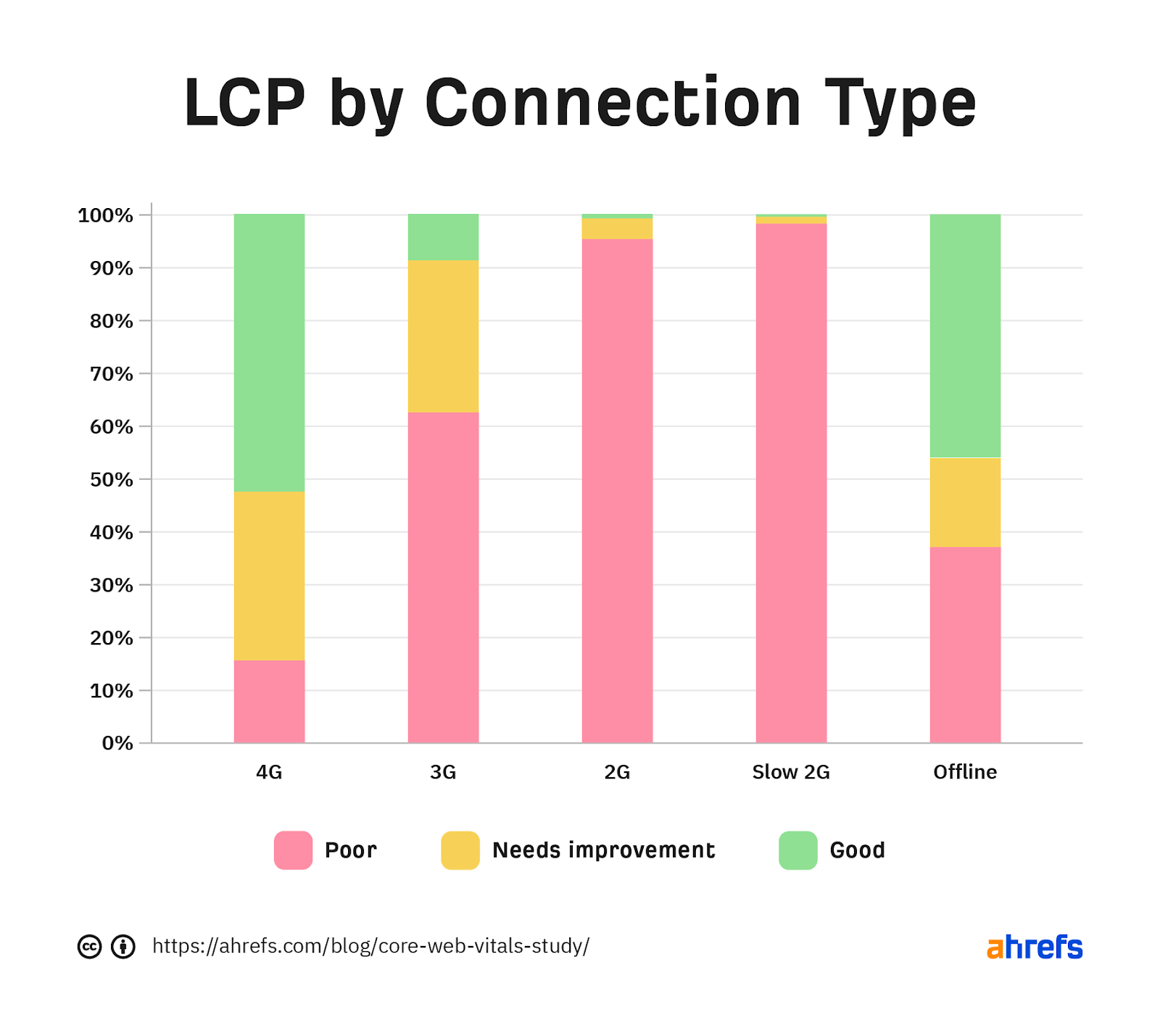 Breakdown of the LCP by connection type.

Few sites have to worry about FID, even on slower connections. 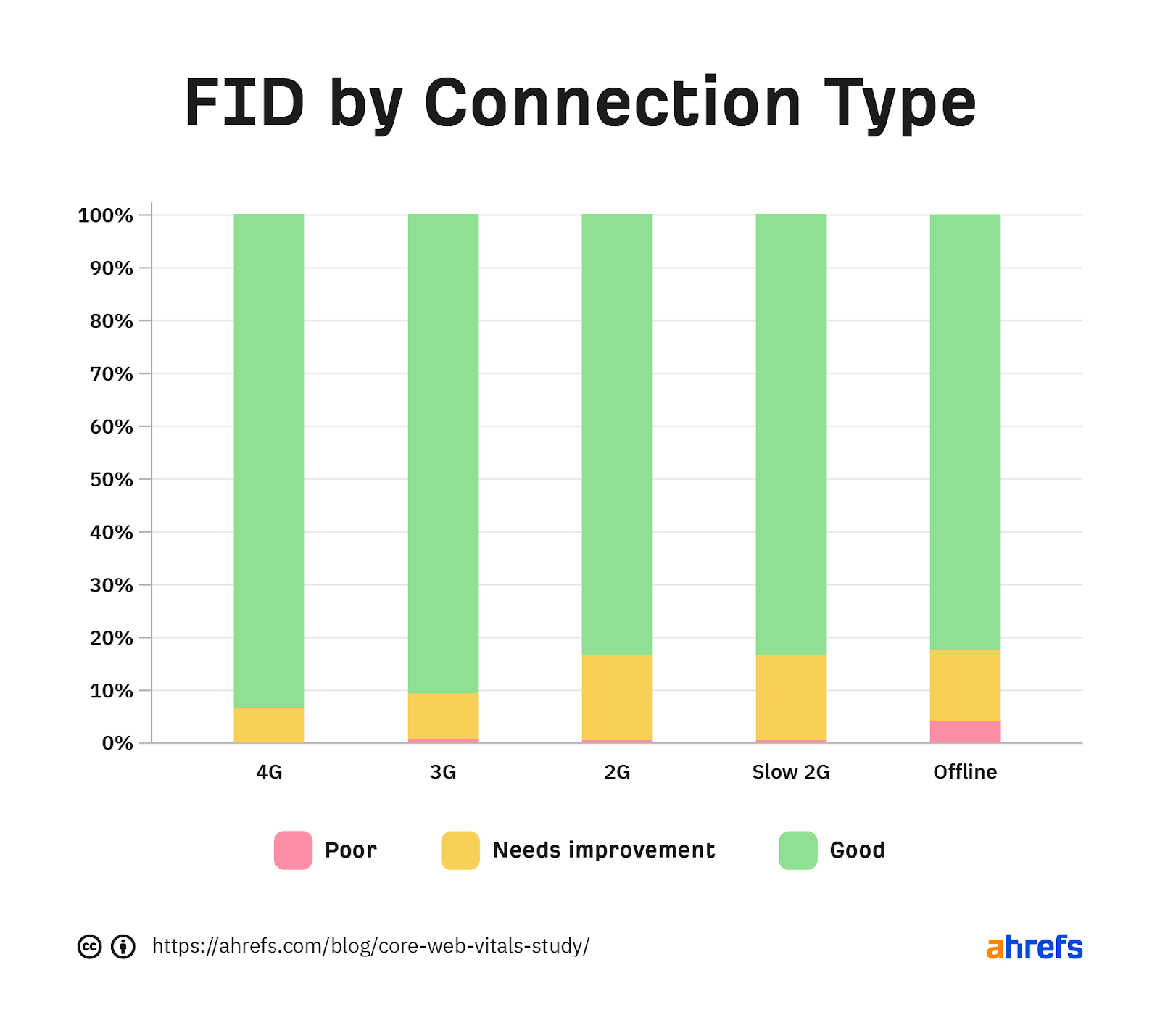 Breakdown of the FID by connection type.

Many sites have problems with CLS on slower connections. 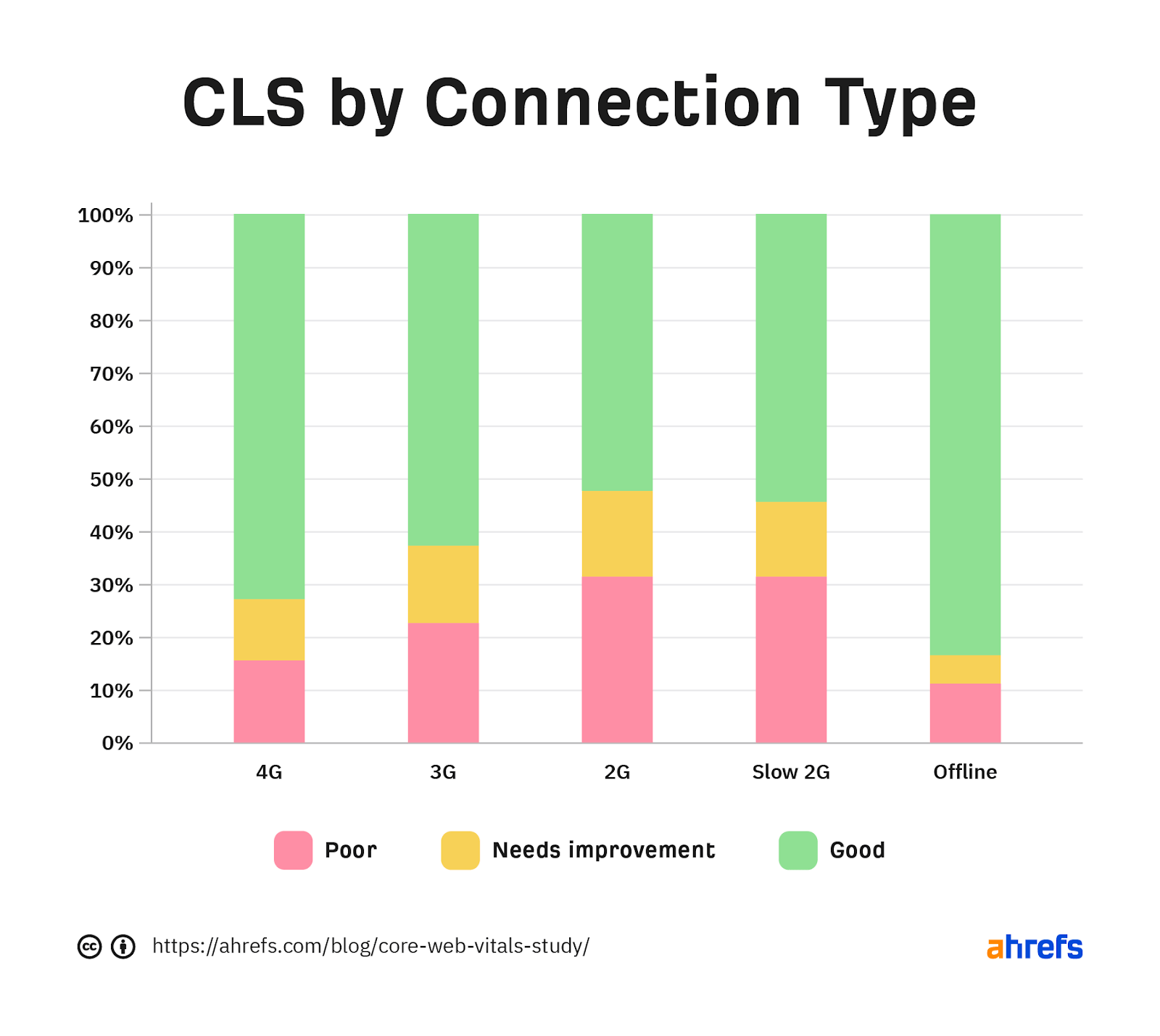 Breakdown of CLS by connection type.

The location of your users seems to have a big impact. Different countries have different device preferences and different network infrastructures. If your users are in a country where everyone is using desktop devices with fast internet, your website will most likely have good Core Web Vitals. The reverse is likely to be true for websites whose users all use older phones with slower connections. 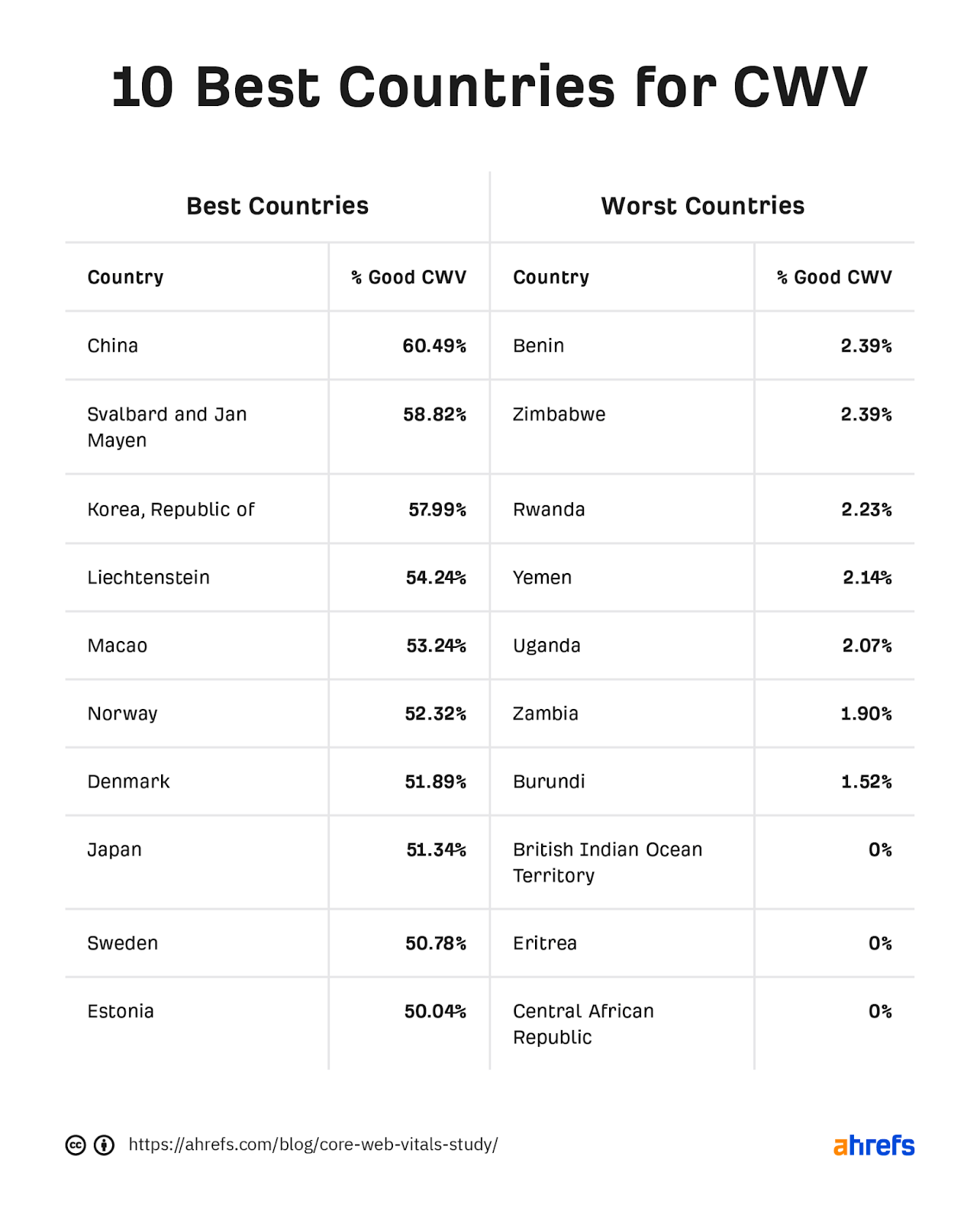 The United States ranks 38th in the data with a pass rate of 41%. If you’re curious, here’s the full country data for August 2021.

A quick thank you to Oleksij Golovko for collecting this data from Ahrefs Site Audit. He pulled data from 43.66 million unique pages. We found that only 5.21 million (~ 11.9%) had at least one Core Web Vitals metric, and 93% of these (or ~ 4.85 million in total) had all three metrics.

Fewer pages than the overall origins (domains) are passing the Core Web Vitals (only 21.2% of the pages). Not sure how to fully explain it. I suspect it may be due to caching where subpage loads tend to be faster. 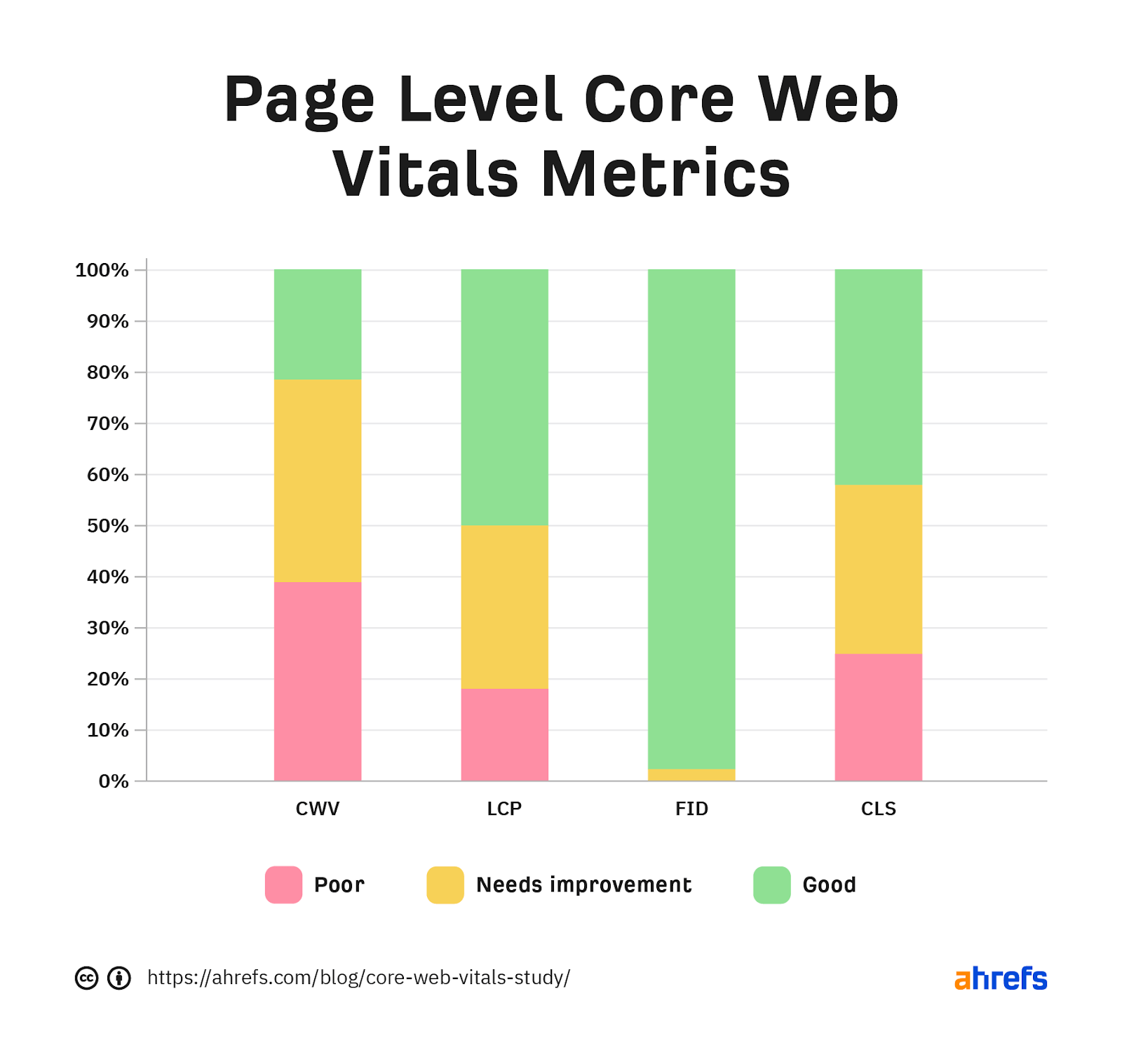 I wanted to study the impact of Core Web Vitals on rankings. But due to the timing of the launch and other updates that happened at the same time, I don’t think there is a good conclusive method. There are other studies that show a correlation between speed improvements and rankings. But saying this isn’t much different than saying that sites that are more likely to work on their SEO rank better than those that don’t.

If you want to log Core Web Vitals data for your site as you make improvements, you can enable the option in the Site Audit settings. All users, including free users, have access to this via Ahrefs Webmaster Tools.

If you’re having trouble improving your metrics or want to learn more about how pages load, check out our guide to page speed.

Which data surprised you the most? What data would you like to see if we update this study? Let me know on Twitter.