Are links still important to rankings? A study by Ahrefs


In the past few years, I’ve seen more people say that links are dead, don’t count towards rankings, or have lost their importance. Links are an important confirmed ranking factor, so I thought it would be interesting to test their impact.

Instead of creating links to pages, I thought the easiest way to test it would be to remove links to a page and see what happened. With the help of Joshua Hardwick, Ahrefs’ content manager, we selected three articles and disavowed all links to these pages for a month, thus eliminating the value of external links. A month later, I removed them from the denial file, which was supposed to restore the links’ value.

The denial file was processed immediately, but the links within the file still had to be scanned again before the impact of the denial could be seen. It was the same once the disclaimer was removed. We had to scan the link pages again to let us see the impact. I figured a month out of each time frame should be long enough for us to scan the most important links and for us to see an impact.

We disavowed 3,476 links in three blog posts. It was uploaded on August 17 and removed four weeks later on September 14. 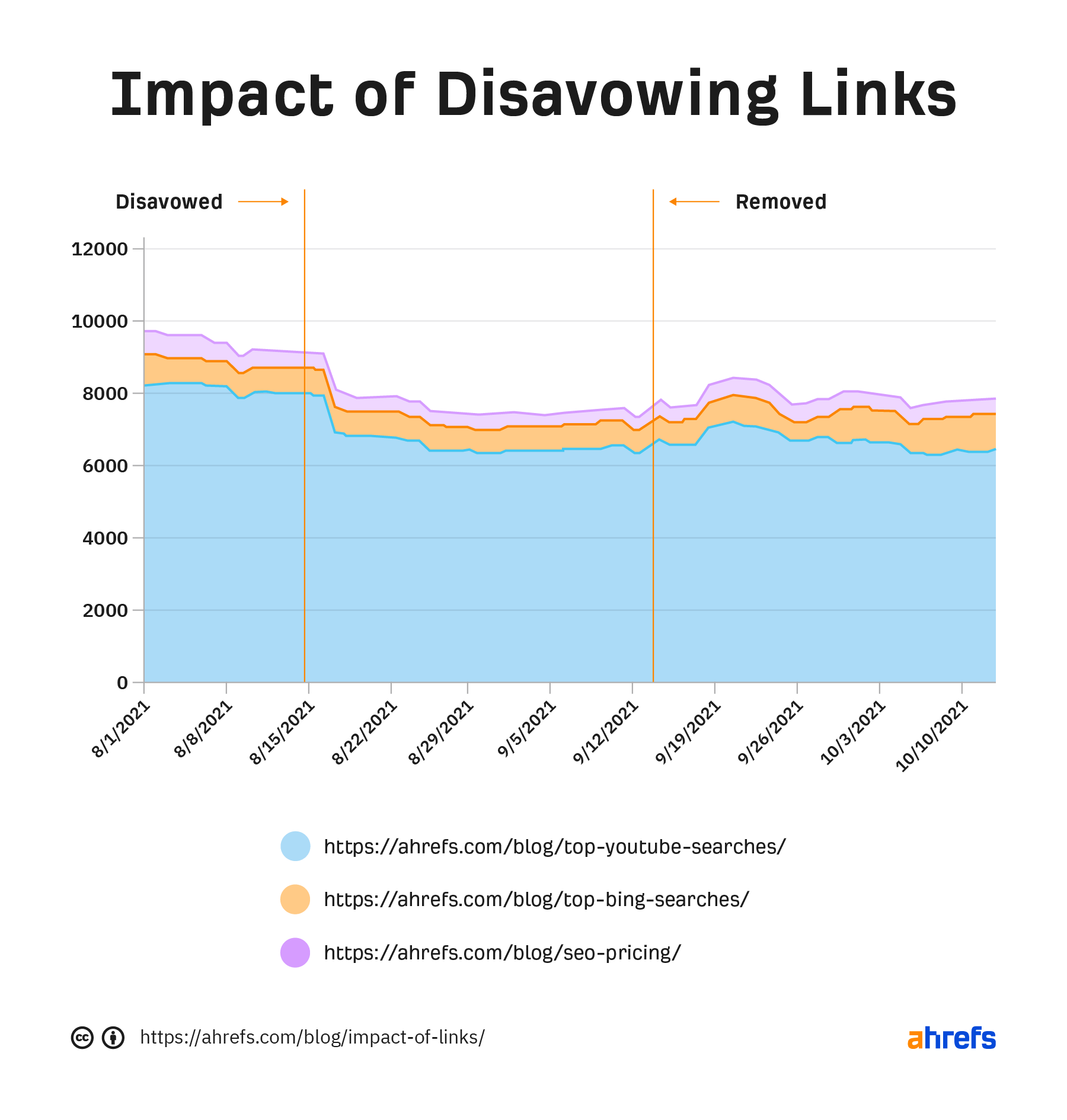 See the immediate drop in traffic when I uploaded the denial file on August 17th. The downward trend continued for a while as more pages linking to these blogs were crawled. You can also see the immediate increase when I removed the disclaimer file on September 14th. I suspect this immediate impact is due to the fact that the most valuable links are on pages that are likely to have higher PageRank and are crawled more often.

Now let’s look at the examples in more detail.

The graph above shows Ahrefs’ average organic traffic, which is a stable metric that measures search visibility. It approaches traffic based on rankings and expected CTR for all keywords a page ranks for.

I wanted a stable metric because things like clicks or impressions could be affected by seasonality or user behavior. Google Search Console’s metrics for clicks and impressions followed mostly the same trends, but not in all cases.

The test covered three different pages in total, so let’s take a look at each example. 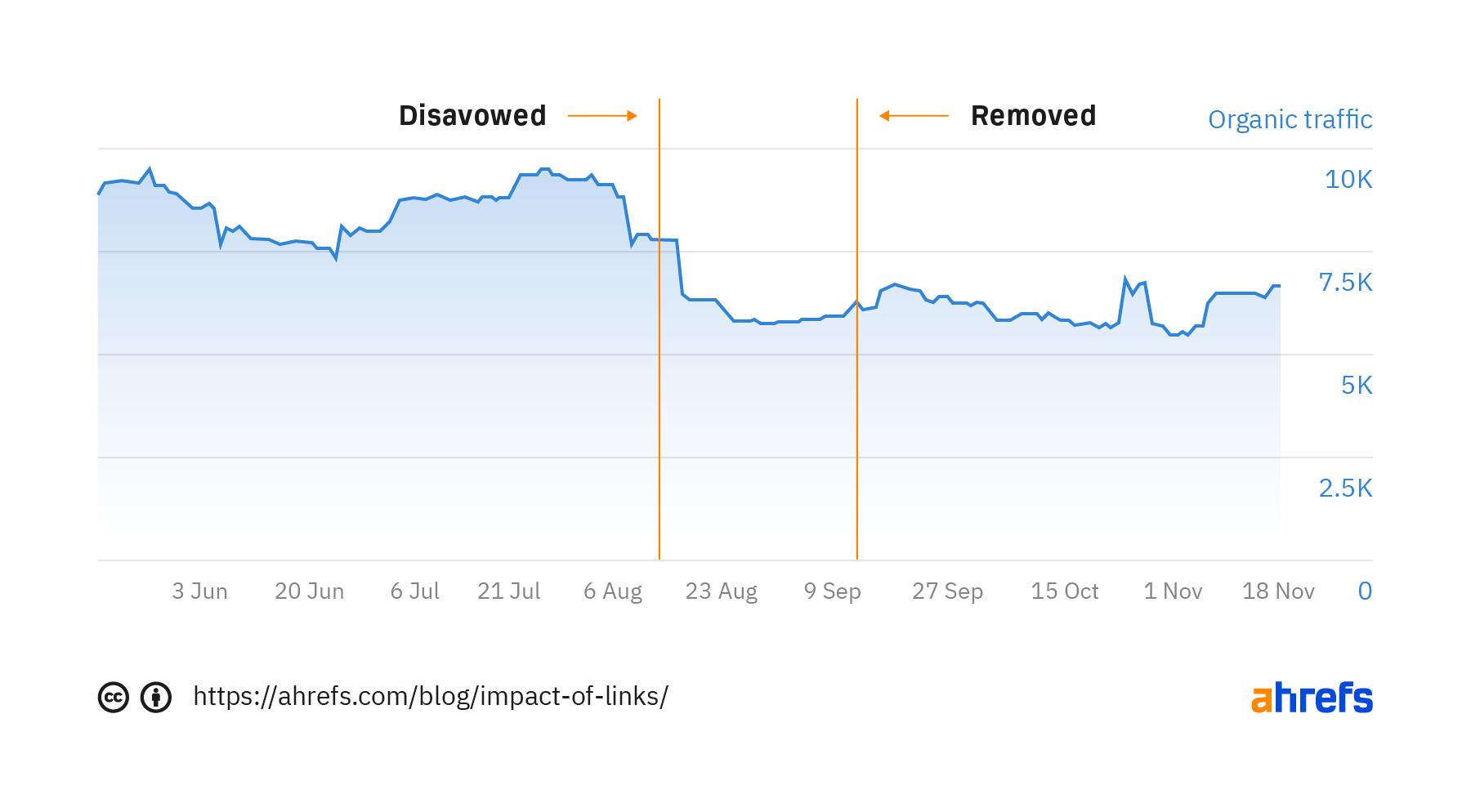 I expected that we would lose rankings for some of the most popular searches and that we would end up losing some traffic due to the competitiveness of this topic. In the end it was correct. This page lost about 18% of its search traffic in the first month. But I didn’t expect it would drop another 4% after removing the denial file.

We’ve recovered more than half of the loss since then, but search traffic is still declining overall.

Let’s take a look at why.

Here are some of the terms that most influenced our traffic estimates and their rankings during the test. 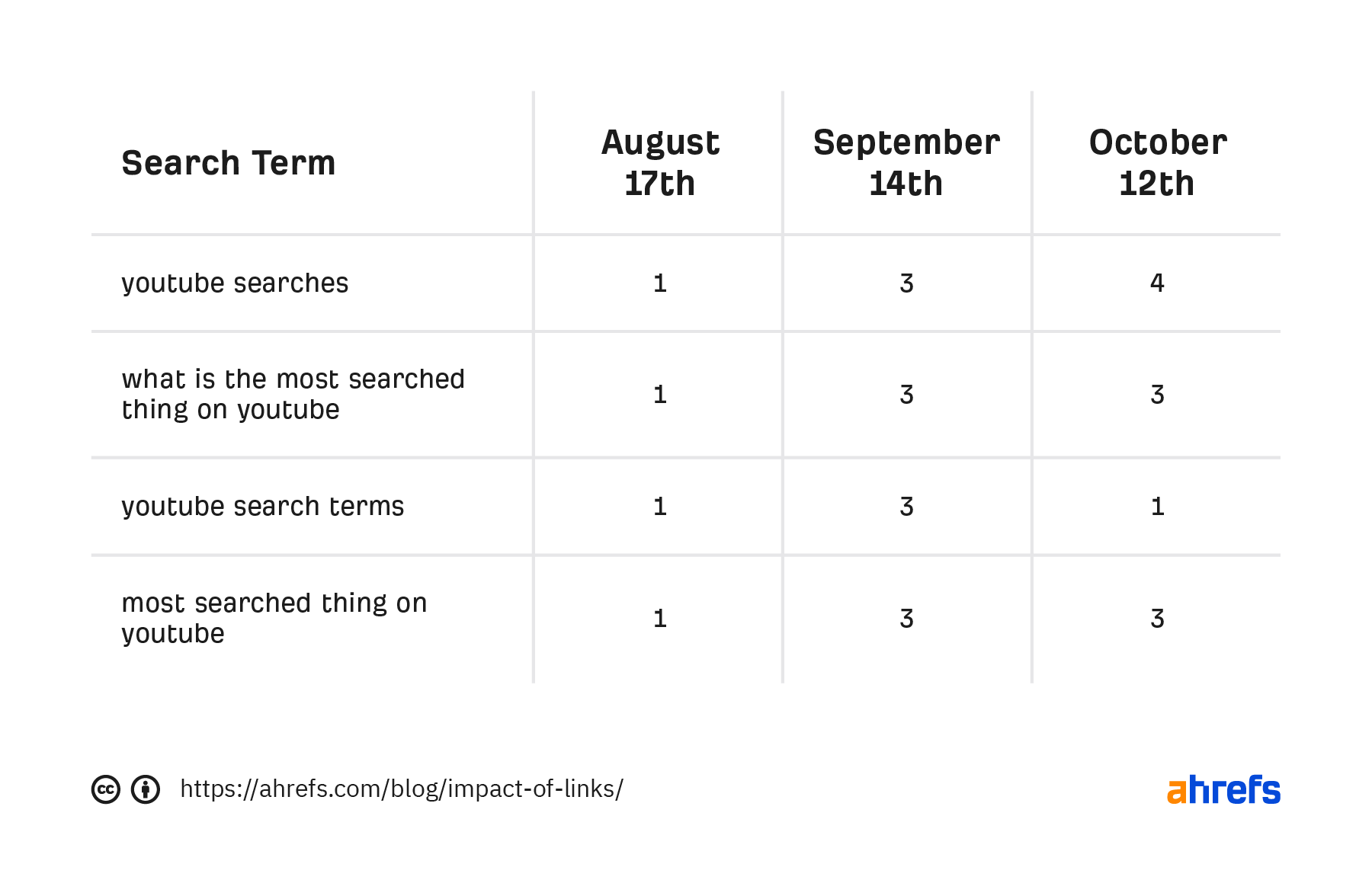 For “YouTube searches,” a YouTube page and a Google Trends page pushed our page down in the results during the test. We are back to number 1 and have recovered traffic for this quarter. 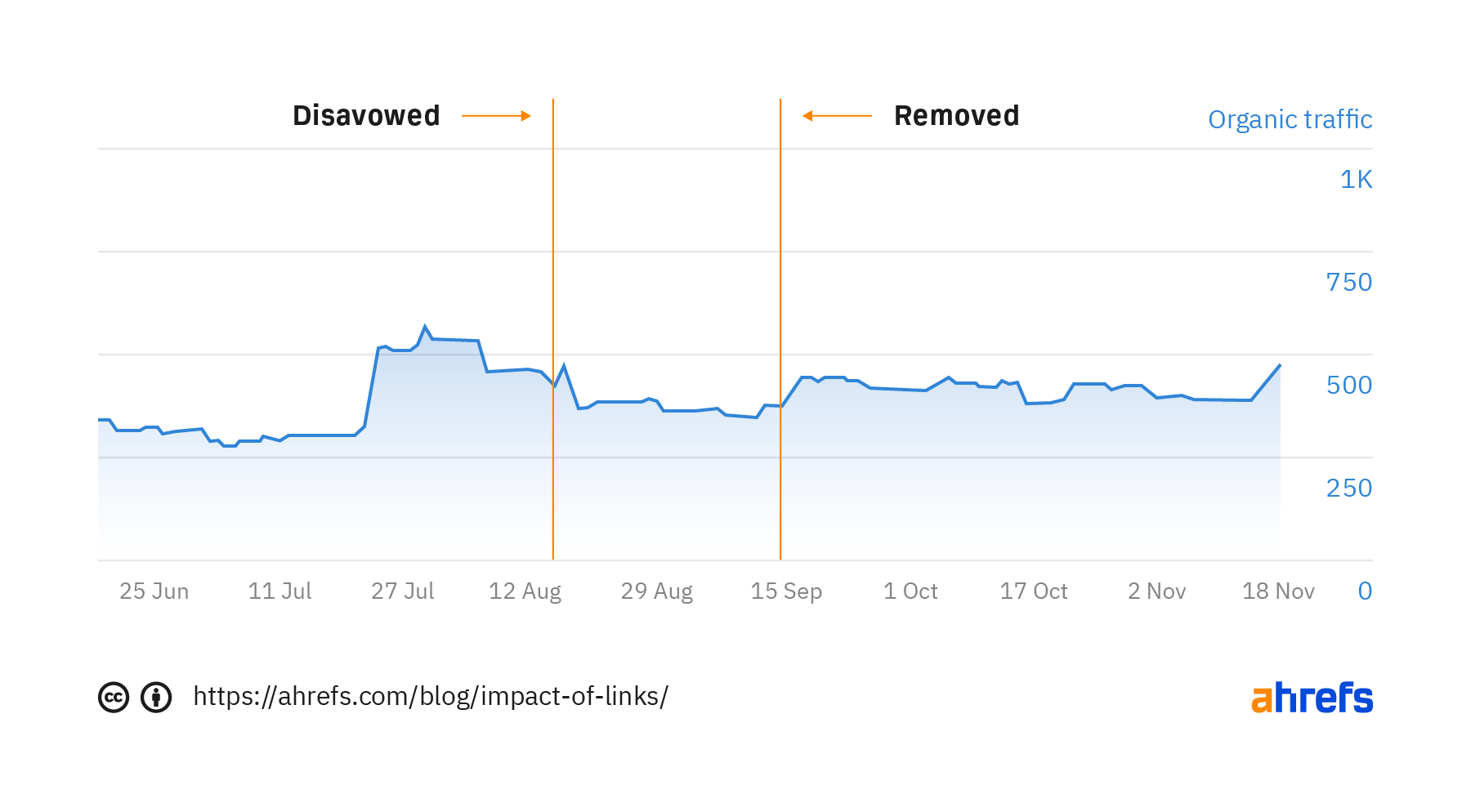 I wasn’t expecting a big impact on this page by removing links simply because the competition here was much weaker. But in this case I was wrong. While the links were disavowed, this page lost 13.3% of its traffic. But when we removed the file, the page reverted to 99% of the previous traffic.

Here are some of the terms that most influenced our traffic estimates and their rankings during the test. 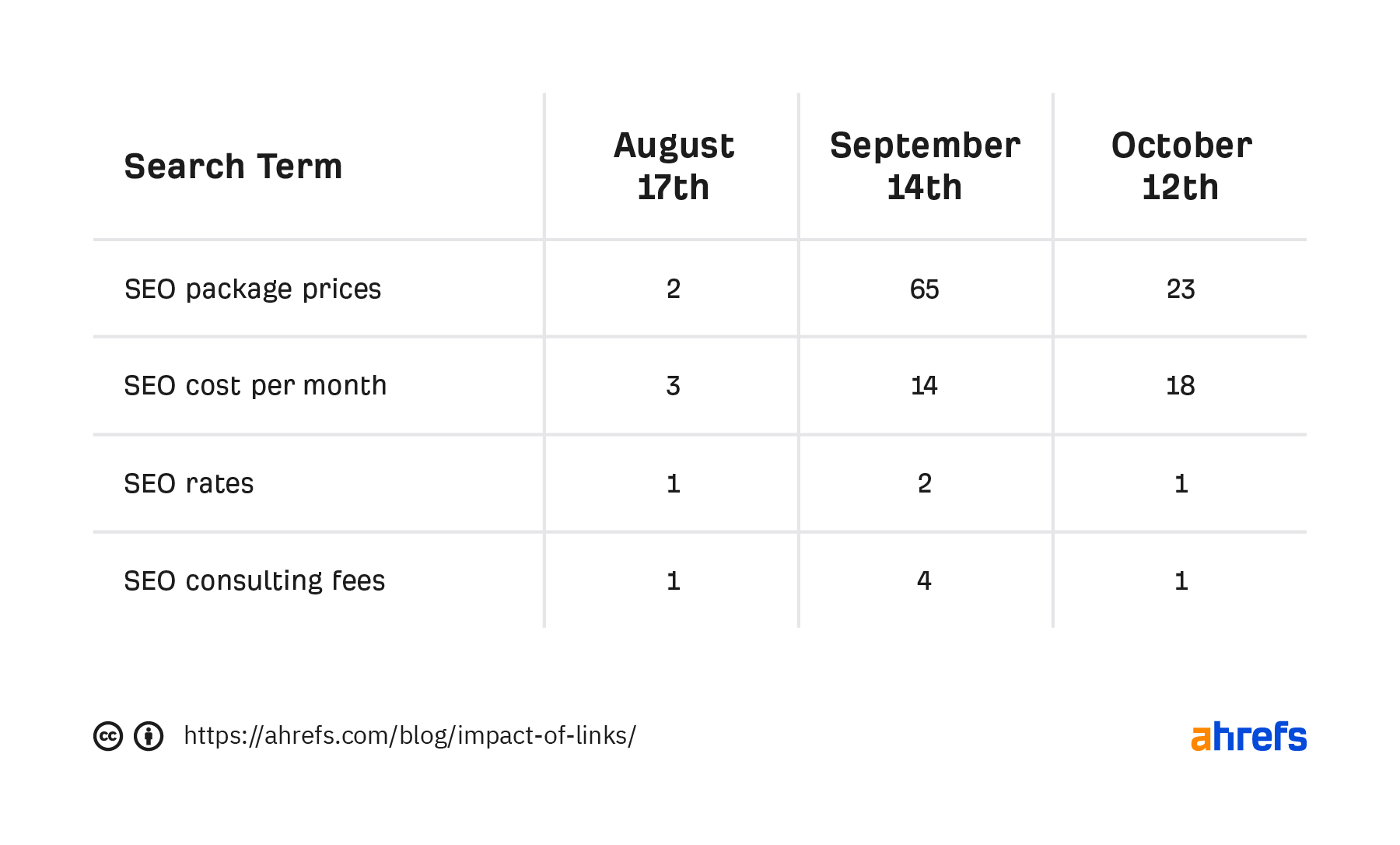 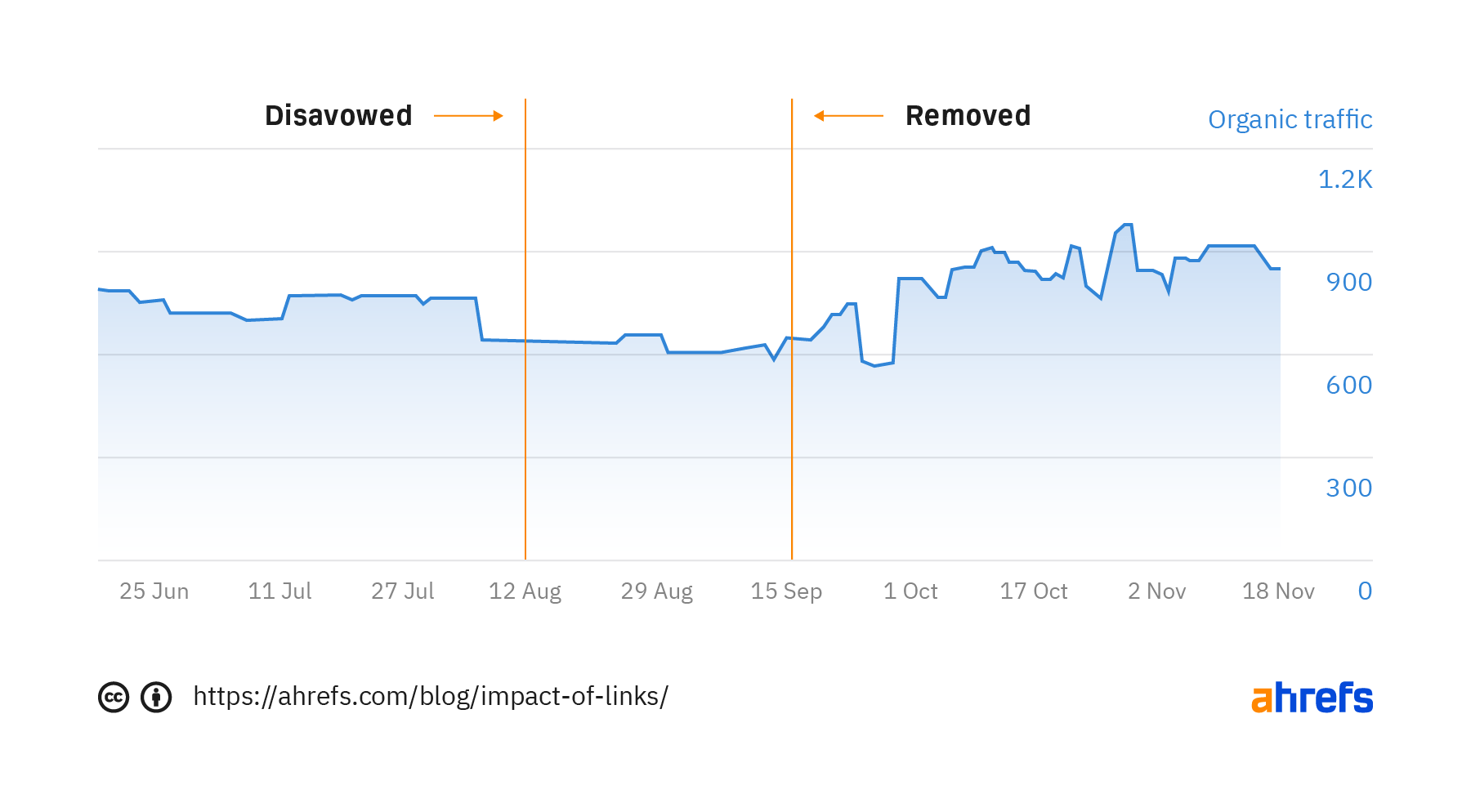 Due to the competition here, I was expecting this page to see a decent drop. Interestingly, traffic barely declined during the disclaimer period. But once the disavow file was removed, page traffic increased by over 44%.

This is actually the page that messed up the trends for clicks and impressions. I think it’s mainly because a lot of the terms weren’t really affected.

Only one term had a real impact on the traffic estimates for this page.

Links still matter. The tested pages are still down where they started. It could be due to algorithm changes, links that have not yet been crawled again, or that other sites received more links during the drop. But I am confident that we will at least get back to where we were.

I absolutely do not recommend disavowing all links to your pages. The disclaimer tool, in general, should be used with caution, as Google mostly devalues ​​bad links for you these days.

Do you think we should run this test several times to see what happens? Let me know on Twitter.